by in Face, Main, Rhinoplasty

The purpose of rhinoplasty (also known as nose correction, nose reshaping, or simply nose job) is to create correct aesthetic proportions of the nose and face. It is the most frequently requested cosmetic surgery procedure for face beautification. In 1/3 of all cases we only work on the tip of the nose, to reduce it’s length, refine and project it. Rhinoplasty requires accurate and precise movements with excellent knowledge of the anatomy.

Rhinoplasty can only correct the outer appearance of the nose! If there is an impairment of the nasal function (ex. deviated septum, polyps, deviation of ethmoid bones, mucosal edema etc.), we work ENT specialist, when necessary, prior to a cosmetic nose job.

A surgeon cannot make your nose like it looks on the face of another person. Your bones, cartilages, skin, individual characteristics and proportions are different!!!

Many patients ask whether Michael Jackson’s nose should be considered as an ideal. Such thinning is impossible without removing bone structures, which disturbs the function of the nose. However, nose’s function is much more important than its appearance! Not everyone can afford to buy and use a hyperbaric oxygen chamber at home to saturate the body with oxygen.

The goal of rhinoplasty is to beautify without disrupting the function!

What are the correct proportions of the nose?

The aesthetic standards for correct proportions of the nose are: 1/3 the length of the face (golden section rule), straight or slightly curved dorsal line, 90 degree angle at the tip, possibly thinner dorsum and tip, narrow alar base.

Why do we use Closed, instead of Open Rhinoplasty?

We practice closed rhinoplasty to perform the necessary correction of the nose, and more specifically – Dr. Serdev’s author techniques. This approach prevents the traumatic “opening” of the nose, it is mini-invasive and without bloodloss. Instead, the manipulation and sutures are made inside the nose. In addition, casts, plasters and intranasal packings become unnecessary. There is no swelling, no “black eyes” and no scars.

In open rhinoplasty the surgeon would make an incision across the columellar area (the skin-covered barrier between the nostrils) and pulls the skin upward. In this way he can see the cartilages and bone structure of the nose. Then, he reconstructs the cartilage to alter the shape and size of the nose. In the end, the surgeon puts sutures in place to close the incision and inserts intranasal packings for a few days. A cast would be set on the nose for a week so that the new shape stabilizes. The real shape of the nose becomes visible only after one year. However, the scar on the underside of the nose will remain visible.

In our clinic we do not like the open rhinoplasty, due to a lot of negatives (loss or necrosis of cartilage, great percentage of secondary corrections, etc.) and visible scars. Therefore, we use closed rhinoplasty techniques, without visible scars.

“I am coming out of surgery just now. For me, the anxiety before the operation was very big, I had fear. But it actually it was not an intervention, according to me – as if I was going to the dentist. There was no pain, it was very quick to me. The difference before and after is so huge… exactly what I wanted! Most importantly, I am not dizzy, there is no pain,  I feel very good. Such a painless surgery, after all others that I’ve had… [3 days after surgery] I don’t have any problems. In short, I can say that the feeling cannot be better. As if there hasn’t been a surgical intervention.”

The techniques used in our clinic can be used for primary, as well as for secondary rhinoplasty. They are:

The most common causes of secondary nose job are:

The asthetic correction of the nose is one of the most tolerable procedures for our patients. This is because most of the stages of the operation are Dr. Serdev's author techiques in rhinoplasty. Nose correction in our clinic is an outpatient procedure with local anesthesia, combined with IV sedation. Rhinoplasty is relatively short at his hands but can last for hours with other surgeons, which causes too much trauma to the tissues.

No Trauma, No Casts, No Bleeding and No Intranasal Packing

Due to the minimal trauma in our operations, a minimal stripe bruise can appear linearly under the eyes in only about 30% of cases of hump removal but it only runs for about 5 days. After the operation and only after humpectomy, the patient wears skin-color tape for three days. Intranasal packing is not necessary (and even traumatic) because it is placed in the inner nose, while cosmetic corrections deal with the external nose. Full return to social life is possible from the first day due to the lack of bruises. Only in cases of humpectomy, it may be postponed to the 5th postoperative day.

After surgery, the patient has the obligation to appear at the designated follow-up sessions, which are generally as follows:
- on the day after surgery - cleaning the nose;
- on the third day - taking the skin-colored tape off (only in cases of humpectomy);
- two weeks after surgery - removing any remaining stitches, if necessary.

We do not recommend operations before the legal age. However, in rare cases of severe generated complexes, we can perform rhinoplasty upon request and signatures by both parents. In such cases, minor adjustments could be necessary after the completion of nasal growth, usually bewteen the ages of 18 and 21.

Rhinoplasty is one of the most effective operations. Thanks to the methodology of Prof. Dr. Serdev it is also one of the lightest in cosmetic surgery, with very short recovery period. In some cases patients may wear a tape for only 3 days after surgery. Furthermore, there are no visible signs of intervension - no casts, no intranasal packing and no "black eyes" bruising.

The methodology is based on the achievements of the first president of the American Academy of Cosmetic Surgery - Dr. Julius Newman, surgeon in Hollywood, called "Dr. Nose" and improved by Dr. Serdev through basic techniques known in the world as Serdev Tehcniques in Rhinoplasty - "T-zone excision", "columella sliding", as well as the well-known Serdev Suture methods for nasal tip refinement (narrowing) and alar base narrowing.

T-excision rotates the tip upwards and the columella sliding gives projection. When we have to correct a hump, we perform a medial resection to the bone-cartilage pyramid. To close the open roof after humpectomy, a very atraumatic methodology exists - the digital fracture - created by Dr. Hernandez from Ecuador. We use it to prevent from bleeding and formation of bone steps on the side of the nose, also known as "crow's feet" . 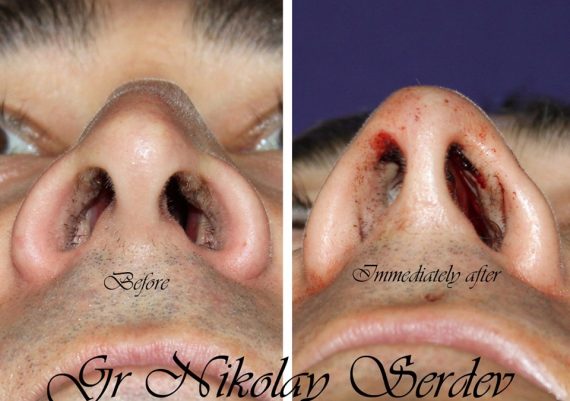 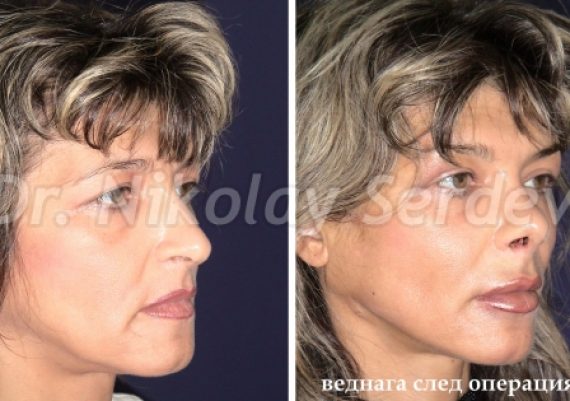 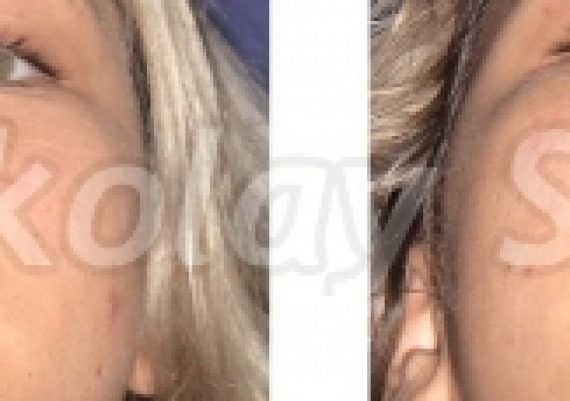 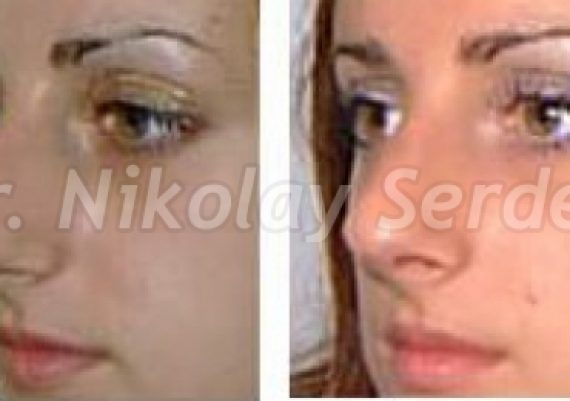