In cosmetic medicine we use botulinum toxin (most commontly known as Botox) to treat wrinkles. The toxin blocks the transmission of nerve impulses at the synapses. In this way, we selectively paralyze the muscles that cause skin wrinkling. They can no longer react by excessive contraction and become flaccid. As a result, the skin above them flattens.

Botulinum toxin’s first application was to treat strabismus (a condition in which the eyes are not properly aligned with each other). Later on, it became common practice in neurology, plastic surgery and as a treatment for excessive sweating.

Although the toxin is mostly known as botox, “Botox” is only one of the products available on the market. In our practice we have used the following substances, depending on their legalization/certification status:

The concentration of toxin between the two is quite similar and most surgeons agree that there is no significant difference between them.

Botulinum toxin can be injected to the following areas:

– The glabellar muscles of the forehead – to traeat the vertical wrikles, which give an angry look;
– The orbicularis oculi – to block the creation of “crow feet” wrinkles around the eyes;
– The frontalis – to treat the horizontal wrinkles of the forehead.

Detailed knowledge in anatomy is crucial – injections of the toxin in neighbouring muscles can deform the face for months. Only qualified doctors should practice this procedure to prevent unwanted side effects. The injection itself takes a few minutes. The surgeon uses a special syringe and injects a small but exact amount of toxin to the muscles involved. Men usually require a larger amount, due to stronger muscles. Patients easily tolerate the minimal pain of injection and there is no need for local anesthetics. In selected cases we can use a sedative drug or local anesthetics.

The effect becomes visible a day or two after the procedure and reaches its maximal effect about 10-14 days later.

The full effect duration of the treatment is usually 3 to 6 months, depending on multiple factors. Some partial effect may last up to 8 months. Longer action causes muscle fibers to degenerate and it is therefore recommended to repeat the treatment in 3-4 months. After several treatments, the full effect periods last longer and usually require less and less botulinum toxin to achieve it. There is no permanent effect.

Permanent effect of blocking the glabella mucles can be achieved via the scarless Serdev Sutures method for glabella muscles ligation. The aim is to ligate the muscles, which leads to necrosis and we thus block their activity. This techniques blocks wrinkling with an average of around 80%.

Precautions and Side Effects

The use of botulinim toxin for treating wrkinles is relatively safe.

Precautions include: known allergies to botox or albumin, muscle weakness, use of aminoglicozide antibiotics, pregnancy or breastfeeding.

Common side effects include: bruising around the injection sites, headache, flu like symptoms and local pain. Another unwanted effect is paralysis of adjacent muscles which may cause eyelid drop (usually partial), double vision and difficulty to swallow. Because only part of these muscles are paralyzed for about 2-4 weeks, there is usually a full compensation of the remaining muscle activity after 3-6 months.

NB! Again – only qualified doctors should practice this procedure to prevent unwanted side effects! 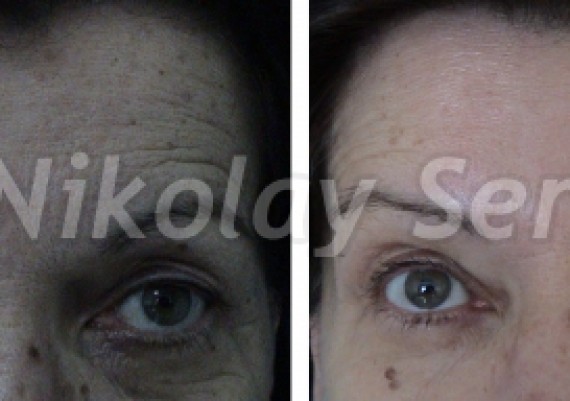