Narrowing of the nose

by in Rhinoplasty, Serdev Suture® Lifts

When narrowing the nose, besides working on the tip and the nostrils, we often have to narrow the dorsum (back of the nose) – the upper half (after removing the hump), as well as its lower or middle part. We perform these procedures using Dr. Serdev’s bloodless and atraumatic techniques.

Narrowing of the nasal dorsum (back of the nose)

This procedure requires closing the open roof of the nasal bones after humpectomy. Removing the “roof” of the nose leaves it open. The standard approach for narrowing the nose requires additional lateral osteotomies of the nasal bones on the side of the base and moving the bones inwards. This leads to bleeding and bruising around the eyes (“black eyes”). This method often forms visible “steps” (known as “crow feet”) of the nasal bones in the middle and on both sides.

To avoid this malformation, as well as trauma and bruising, Dr. Serdev introduced the technique of digital fracture (breaking) of these bones. This technique leads to their tilting towards each other to close the open “roof” (the back of the nose) and its narrowing without bleeding and trauma. This technique is atraumatic, does not cause soreness and bruising after surgery. In addition, it does not require casts or intranasal packing. The postoperative period is minimal. Minimal bruising can appear in about a third of all cases, in the form of lines on both sides of the nose. Patients tolerate this technique very easily, due to lack of pain. Swelling is minimal. Return to social life is immediate or, in the case of minimal bruises, within a few days.

Narrowing of the lower and middle part of the nose

As with every injection, the signs of punctures disappear within 1-2 days. The procedure is bloodless and atraumatic.  Patients can resume their daily activities on the day after surgery or rest for a few days if they wish.

Narrowing the back of the nose can be done as a standalone procedure, in combination with other Serdev Techniques for Atraumatic Nose Correction or with complete rhinoplasty. Thanks to the atraumatic nature of the methodology, rhinoplasty may, if necessary, also be combined with different scarless Serdev Sutures lifts or ultrasonic liposculpture of the face.

By using Dr. Serdev’s suture techniques, we can also raise the back of the nose or get rid of irregularities. Sutures are performed through skin punctures. The technique is atraumatic and mini-invasive. No patches, casts or intranasal packings are necessary. The skin punctures disappear within two days. 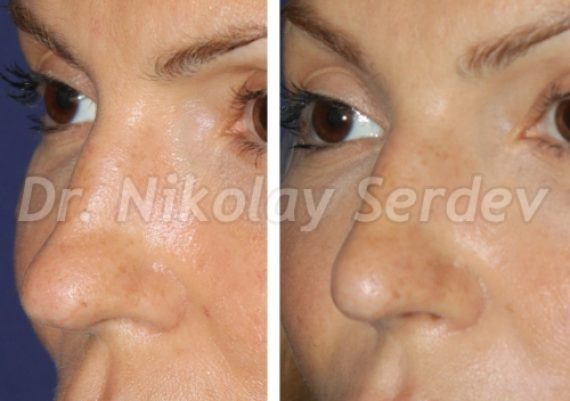 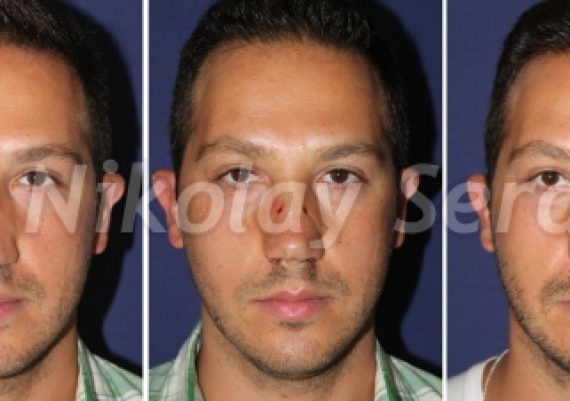